The role playing game to make young people aware of the dangers of alcohol!

Will you reach the end of your mission?

The city of Nantes wanted to launch an awareness campaign aimed at young people aged 12 to 25 on risky behavior linked to alcohol consumption. 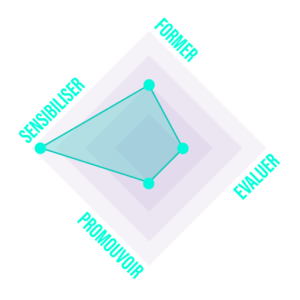 Awarded 2 prizes, an European Serious Games Award and the Creative Ideas trophy, Happy Night is a serious role-playing game, but full of humor, which engages the player in an exciting and unusual quest. The offbeat scenario captures the player’s attention and engages them in the realistic atmosphere of festive evenings thanks to its 3D world and expressive characters. Captivated by his investigation, the user is facing up the consequences of his choices on his investigations since they directly affect the course of the game. This pragmatic situation leads the player to wonder about the consequences of his consumption of alcohol and that of others and to be aware of its dangers.

Making you aware of your responsabilities without judgment, this Point & Click game is a powerful awareness and prevention tool, enabling the full involvement of young audiences, who are difficult to reach in these complex topics to address.

Brigade
Immerse yourself in the heart of a fascinating investigation into this role playing game intended to sensitize the police officers to psychosocial risks.

Wattou
In this realistic role-playing game, learn and exercice good practices to prevent the risk of accidents!